The Rogers State University campus is known for its large-scale sculptures of three U.S. presidents Thomas Jefferson, George Washington, and Abraham Lincoln created by sculptor Yon Sim Pak. Born in Korea, Pak built a reputation as a portrait painter, and came to the U.S. as a young adult. Each statue is constructed with skeletal structures of steel, covered with a white masonry cement and polished with a special polymer to give them the look and feel of granite. Pak used a special blend of cement, which was patented by his friend Paul Kellert of Mannford, Okla.

Rogers State College president Dr. Richard Mosier became aware of Pak’s work at the Pepe Mendez Studios in Tulsa, where he created a statue representing Michelangelo’s Pieta for the grounds of the Sisters of the Sorrowful Mother convent in Broken Arrow, Okla. Pak was commissioned to develop the Thomas Jefferson statue to commemorate the U.S. Bicentennial. Mosier later invited Pak to serve as an Artist-in-Residence. He taught at RSC in the late 1980s and early 1990s. While at RSC, Pak also sculpted statues of George Washington and Abraham Lincoln. Pak often described his art as “eternal-ism,” addressing God, the heavens, and nature. Threads of freedom and democracy also run throughout his work. He often cited Michelangelo as inspiration for his art. Thomas Jefferson is perhaps our best-known and most visible statue is located at the main entrance of the Claremore campus. Jefferson was the third president of the United States, the principal author of the Declaration of Independence and one of the most influential founding fathers. The founder of the University of Virginia and widely recognized as the father of American higher education, it is only fitting that Jefferson is the first image visitors see on our campus.

The statue was commissioned by our predecessor institution, Rogers State College, to commemorate Oklahoma’s Diamond Jubilee, or 75th anniversary celebration, in 1982. The Jefferson statue is situated in such a manner that he is looking in the direction of the nation’s capital; Monticello, his original home in Virginia; and the University of Virginia. His left hand is extended, welcoming students, faculty, and the public to our community of scholars, signifying the educational opportunities available to all. His right hand grasps a book of knowledge, and the pillar symbolizes his talents as an architect. The walking stick characterizes his strong belief in physical exercise. George Washington was the nation’s first president and one of its first military leaders, serving as Commander-in-Chief of the Continental Army during the Revolutionary War. The statue of George Washington was installed and dedicated in the middle of the RSU campus in 1987 to commemorate the 200th anniversary of the U.S. Constitution.

With this statue, RSU honors not only Washington, but our nation’s devotion to democracy, our military heritage, and the university’s history as a military academy. The Oklahoma Military Academy operated on this campus from 1919 to 1971. The OMA was the state’s premier military institute, and was commonly known as the “West Point of the Southwest.”

The OMA has an extensive register of graduates who became great leaders, both in military and civilian life. More than 10,000 OMA cadets attended the institution, 2,500 graduates served in the Armed Forces of the United States during World War II, the Korean War, and the Vietnam War, and more than 100 OMA graduates gave their lives in service to their country. Today, OMA alumni continue to support RSU through scholarships for our students, and they meet each year on our campus for a reunion. Abraham Lincoln is the newest and most elaborate sculpture on the RSU campus, installed in 1992. Lincoln was the nation’s 16th president. In this sculpture, titled “Emancipation,” Lincoln is delivering the Gettysburg Address. He is accompanied by the American flag, angels, the Bible, and the ruins of the Civil War.

Lincoln delivered the Gettysburg Address on November 19, 1863. As a result of research conducted by RSU math and science students and faculty, the statue was positioned facing east, so that the rising sun will strike Lincoln full in the face on each November 19.

Lincoln delivered the famous address, which began “four score and seven years ago,” at the dedication of Soldiers’ National Cemetery in Gettysburg, Pennsylvania, where, four and a half months earlier, Union armies defeated Confederacy soldiers at the Battle of Gettysburg. In the speech, Lincoln portrayed the Civil War as a struggle for equality for all citizens.

The statue is approximately 28 feet tall, and weighs 25 tons. This sculpture is considered spiritual by some and surreal by others. The statue attracts a significant amount of attention due to its flamboyant nature. Visitors from across the nation come to the campus to see this sculpture. 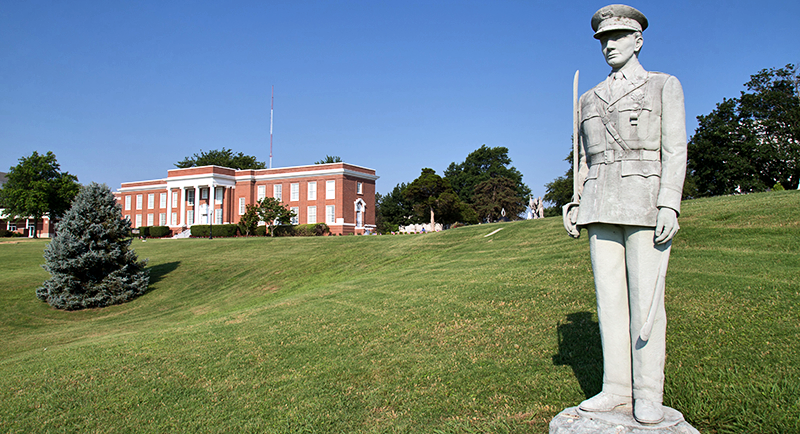 The Lone Cadet is located near the flagpole at the main entrance of the RSU campus. It represents the first and last cadet to attend the Oklahoma Military Academy, and the combined experience of all cadets who attended the military institute, which operated on the RSU campus from 1919 to 1971. The tear in the corner of his left eye represents the memory of OMA cadets fallen in service to their country.