In January 1919, just a few months after the end of World War I, a bill was introduced in the Oklahoma Legislature to establish a military academy at the former site of the Eastern University Preparatory School in Claremore, Oklahoma. The bill was sponsored by H. Tom Kight, who represented Rogers County in the House of Representatives. In the ensuing months, Kight’s bill wended its way through the Oklahoma House and Senate, eventually landing on Governor J.B.A. Robinson’s desk, where he signed it into law in March 1919. Because of his efforts in getting the school established, as well as his support during the succeeding years, Kight is known as the father of Oklahoma Military Academy. But a man named Stephen M. Barrett also was very important to OMA’s early days. The final president of Eastern University Preparatory School, Barrett became OMA’s first president.

The military academy was located in Preparatory Hall, the iconic gold-domed structure which remains the flagship building and centerpiece of the Rogers State University campus. A junior Reserve Officer Training Corps (ROTC) program was established. OMA students, known as cadets, first traversed the Hill in the fall of 1919. There were 30 of them, and since they were required to stay on campus, they huddled in tents throughout the fall and winter months until barracks could be built. By 1923, OMA was a six-year institution, offering four years of high school and two years of junior college. During that decade, the institution added two more historic barrack facilities, the present-day Meyer Hall (1920) and Markham Hall (1927.) Col. Barrett retired in 1924 and Col. W.N. Bryan was named acting president until Col. Walter E. Downs became president in 1927. Downs, a World War I combat veteran, instituted a year-long initiation period for freshmen – with the newcomers dubbed “rabbits.” That nickname stuck for the life of the school. 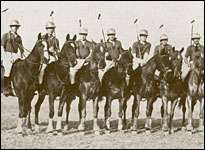 By 1930, OMA’s enrollment was 289 cadets and the school established a senior ROTC cavalry program, with the federal government sending 60 horses and 11 enlisted men to the Hill. In 1931, OMA was named an ROTC Honor School, one of only three military schools below the four-year level to receive the designation by the U.S. Department of Defense. The cavalry program gave birth to a polo team, which quickly became one of the best in the nation. In a famous 1934 event, sponsored by Will Rogers, the OMA Flying Cadets traveled to the West Coast by train with their steeds to beat the Stanford University squad twice in a row. Later in the decade, two major building projects would be completed, the Will Rogers Auditorium and the Jesse Bushyhead Field House, in 1936. The school also established an aviation program. In 1942, OMA adopted a 12-month calendar, the better to turn out young officers for service in World War II. West Point graduate John C. Hamilton and his successor, former Fort Sill Army commander Kenneth S. Perkins, served as OMA presidents during the war years. In 1947, after the war ended, tanks replaced horses on the Hill. The ROTC cavalry unit became an armored cavalry unit – a major milestone in the academy’s history. In the late 1940s, Col. Homer M. Ledbetter took the helm of the school.

In 1953, the Department of the Army ruled that junior colleges could no longer offer senior ROTC programs. Because OMA still offered four years of high school and only two years of college, it was forced to return to a junior ROTC program, much like the one on its campus three decades earlier. It was at this time that talk first began about changing OMA into a high school, a co-educational junior college, or a four-year institution. In 1957, OMA began evening classes. Now, for the first time, a student could take classes on the Hill without having to become a cadet.

Soldiers practicing with a cannon.

Three years later, a blue-ribbon education committee recommended that the school be converted to a co-educational junior college. Enrollment was still rising at the time, with 462 enrolled for the fall 1960 semester. By the time Col. Ledbetter announced his retirement in 1964, the population numbered 758, including day and night school students (total number of cadets was 492.)

The 1960s saw the completion of two new barrack facilities (the present-day Health Sciences Building and Herrington Hall) along with the construction of the Thunderbird Student Lounge (former library, demolished in 2008). With America’s involvement in Vietnam increasing and new officers needed, there was once again a need for military schools like OMA.

The Oklahoma Military Academy, once known as the “West Point of the Southwest,” operated “on the Hill” from 1919 to 1971, and the spirit of its glorious history remains alive today. Col. John E. Horne was a special figure in OMA history, the only former OMA cadet to become the school’s president.

By 1968, when Col. Horne took over, cadets were an increasingly smaller part of the campus population. That year, the Oklahoma State Regents for Higher Education officially allowed women to become day students during the regular semester. A year later, 157 college enrollees were cadets living on campus – about a tenth of the total enrollment.

The youthful social revolutions of the 1960s, and the antiwar stance that accompanied them, hurt military schools everywhere, and the drop in full-time cadets meant that the school was receiving less money for room and board. OMA graduated its final class in the spring of 1971. Col. Horne watched from his office as the school’s flag came down – for the last time – and Claremore Junior College was born, later to become Rogers State College, and in 1998, Rogers State University, one of Oklahoma’s fastest-growing four-year institutions.