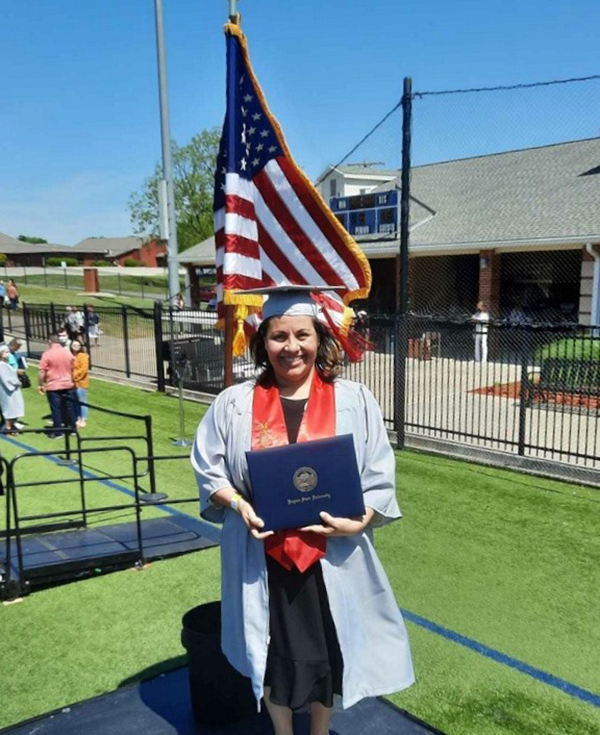 Alma Henning (’21) was determined to give herself and her daughters a successful future, and most importantly, keep a promise to her own mother that she would earn a degree.

Rogers State University graduate Alma Henning (’21) was once told college was too expensive, too difficult and insurmountable for a Latina. Despite the discouragement, Henning was determined to give herself and her daughters a successful future, and most importantly, keep a promise to her own mother that she would earn a degree.

“I am an immigrant from Mexico, a first-generation and non-traditional student. I thought having a degree was about a better job and better income, but a degree broadens your worldview and understanding. I am grateful, I am excited and I have more dreams for my future,” Henning said.

Henning was 6 years old when her mother first asked her to read for her. The family had few clothes, no television, little food, but what she did have was a loving mother and a handful of books. Reading was their escape from the harshness of poverty.

“Books gave me resilience and lifted my soul in many moments of despair. I once read that a drop of water can cut through rocks, not by force but by persistence. That taught me to persist in life without fear of limitations,” Henning said.

She worked as a cashier in Mexico, but opportunities for advancement were limited for someone with no educational background. She looked for a way out of Mexico. She accepted a position in India as an accounting assistant in the office of a large orphanage. While there she learned two new languages, English and Hindi, was taught the QuickBooks bookkeeping software and was eventually sent to orphanages in other regions of the country to reduce expenses and establish stronger operations budgets.

“My time in India made me realize that there were more unfortunate people in the world and made me realize it was up to me to shape my future. My dream to have a career became stronger,” Henning said.

Henning moved her girls to Oklahoma, quickly earned a GED and applied for admission at RSU.

“I took one summer class to see if I could do it. In the fall I took two classes, then in the spring I took four, then five for the following semester. Each class gave me confidence. They developed my social, civic, moral, and thought processes,” Henning said. “Professors encouraged me all the time to do my best, gave me all the tools to succeed, and I felt that the whole university was interested in my success.”

Sidney Brammer, an adjunct instructor for the English department, described Henning as voracious about learning, poised and extraverted.

“Alma has an innate ability to learn new languages. If she heard a word she didn’t know, she wasted no time in looking it up, learning it, and using it. In class she was wonderfully confident, expressive in writing and speaking, inclusive and warm. She had a dream, she persisted, and we are immensely proud of this accomplishment,” Brammer said.

Henning has accepted a position as a county clerk. She will continue taking classes and work toward a bachelor’s degree.

“I wish that my mom could be here to share this moment together. These studies exceed all my expectations. She died knowing that I was accepted to RSU and she told me that one of my dreams was close to being fulfilled. I know she is very proud of me,” Henning said.

Henning, who attended classes at RSU Bartlesville, proudly walked the stage on May 8 to receive an associate degree in accounting. She overcame the impossible and is a testament to resilience and perseverance, and an example for her daughters.